We were at  loose end today so decided we would visit a nearby attraction that I had never heard of before.   Fox Valley Retail Park.  The reason for the visit was that the park holds a regular farmers’ market.   I knew the area of Stocksbridge near Sheffield from working in that area and from seeing the steelworks below me as I drove towards my (other) office in Manchester.  In those days it was recovering from the smokey dark factory sheds which lined one side of the A616.

The area suffered when the Conservative government of Margaret Thatcher attacked the coal and steel industries to destroy the power of their unions and ended up destroying their communities instead.   This blog from Bleddyn Penny describes some of the causes and effects which she achieved.

I’m pleased to say that Dransfield Developments took over the site and have done a tremendous job of refurbishing the buildings to offer a smart, modern and exciting range of national and local shops, cafés, restaurants and bars.

Arriving too early for lunch, we parked easily and then headed off to find a coffee.  There are two Costa chain coffee shops in the Park but we wanted to find something a little different and ended up at McGilveray’s.   The place is so new that they had literally opened up just a few weeks ago and it showed.   The manager couldn’t do enough to please but the coffee and cake we ordered took a while to come, one staff member rushed in apparently nearly two hours late and the manager was still trying to stick up health and safety signs which kept falling back down.  The coffee was, however, delicious and the two scones served with it were more than plenty for one person to eat.

McGilvray’s is located in the original Fox building after whom the whole area is named.  Samuel Fox first established a steel works in the town in 1842 and built up much of the infrastructure of the town which was at that stage a small settlement.  He became wealthy making wires for textile pins for the burgeoning textile industries of Yorkshire and Lancashire (his dad was a shuttle-weaver).   He diversified as these industries declined and became famous, and even more wealthy, for developing the Paragon umbrella frame.

Upstairs are many photographs of the factories and the mainly female workforce.   Toilets for the restaurant are also upstairs, magnificently appointed and decoriously decorated original Thomas Crapper water closets. 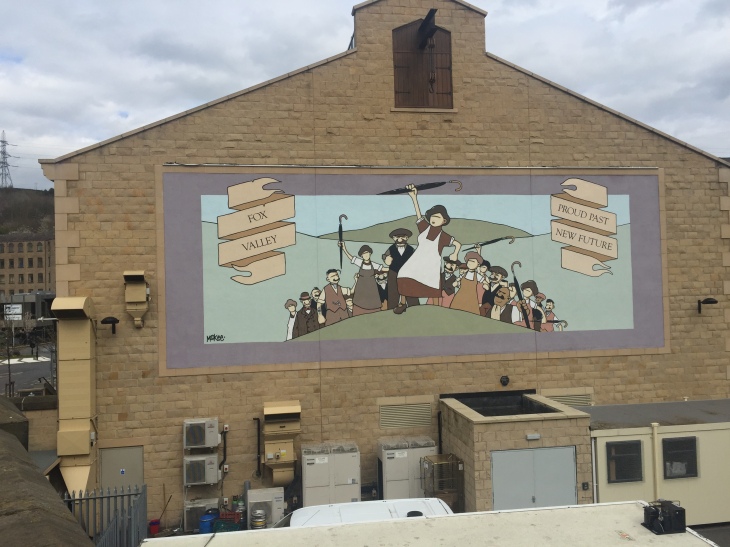 As we explored the shops we passed a restaurant intriguingly name Neomed as we walked into Stocksbridge itself.   It looked sumptuous but we were still not ready for lunch.

After picking up some fresh tulips we wandered towards the market at the far end of the car park.   One of the stalls was selling bread so we stopped to buy a sourdough loaf – my current favourite – and an olive and feta cheese loaf for dipping in good olive oil and drizzling with Modena balsamic vinegar.  As we were boasting of our plans to the baker she smiled and told us that she had recently bought a unit in the park and her son in law was the head chef at the selfsame Neomed restaurant.   She described the food as authentic mediterranean and it seemed almost too good to be true.

We made plans to take our son (the chef) there next time he comes over.   Perhaps we will see you there too?

Postscript: I called back at the market the next day and went to Neomed for a coffee and to try it out. I was very disappointed. The flat white wasn’t really a flat white and the hot chocolate was served with dry stale marshmallows and had to be sent back. Service was around ten minutes for a coffee despite there only being one other person in the café. The counter was untidy and the staff seemed both harassed and disorganised. Give it a miss.