It appears there was dramatic increase in homelessness in England in 2018. The latest figures from the Ministry of Housing, Communities and Local Government (MHCLG) appear to paint a bleak picture. They show a 5% rise in the number of households placed in temporary accommodation, from 78,540 in June 2017, to 82,310 in June 2018. Of these households, 61,480 were families with children.

But the MHCLG stressed that these are experimental statistics and should be treated with caution. Their publication coincides with new duties under the Homelessness Reduction Act 2017 to prevent and relieve homelessness, which require local authorities to intervene earlier in cases of threatened homelessness 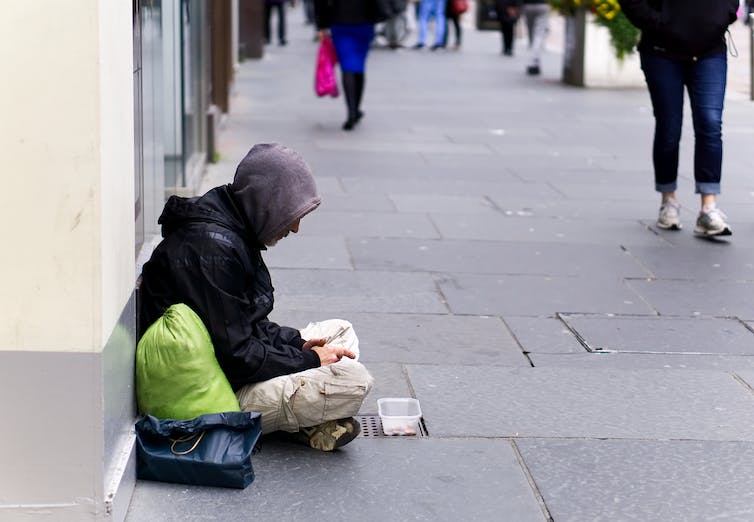 Heather Wheeler, minister for homelessness, who promised to resign if rough sleeping increases on her watch said the statistics suggest the new prevention and relief duties are effective.

But our ongoing research into the new law shows this is disingenuous. The MHCLG has long known that the way it is recording data on homelessness is inadequate. Local authorities have been warning officials that a new national data collection process, called the Homeless Case Level Information Centre (H-CLIC), is ineffective since it went live in April.

The new homelessness figures for April to June 2018 are the first aggregated reports based on this new system. Entire local authorities have failed to return data for this period. For many others their returns are incomplete or contain errors because they haven’t yet got to grips with the new system. The new statistics are likely to under-represent how many people were homeless in this period.

Even before the Homelessness Reduction Act was proposed, the Statistics Agency reported in 2015 that reporting on homelessness was no longer fit for purpose. The new H-CLIC requires local authorities to submit records on homelessness cases they deal with as they progress. As a result, the MHCLG is now collecting vastly more information than under the old system of quarterly reports, but this is taking up a lot more time of frontline workers.

As H-CLIC began, many local authorities chose to transfer all data recording onto the new system. This means they have no internal reports of how many people present to them as homeless, which legal duties they owe to them, and how those cases are progressing. MHCLG now generate these reports at local and national level and has only just released aggregated reports on data submitted for April to June 2018.

In the past, local authorities used their internal reports to plan services. Those local authorities that didn’t anticipate there would be a delay in receiving reports under the new system have struggled to identify where to spend money to relieve and prevent homelessness.

This problem is likely to continue unless significant investment is made in either the technology underpinning H-CLIC or in training frontline staff to complete their data returns. At the moment, even MHCLG acknowledges the data collected under the new system is incomplete and unreliable.

H-CLIC has been supported by an additional £3m investment from central to local government. But this translates to slightly over £9,000 to each of the 326 local authorities in England and Wales. Local authorities have typically used the money to purchase upgrades to their existing software, but these clumsy solutions don’t mesh well with the centralised MHCLG database authorities must upload their data to.

This creates substantial additional problems, from confusion over what information should be recorded, to arduous hours spent rectifying submissions so MHCLG’s system will accept case reports. Managers and advisers are being forced to invest significant amounts of time simply getting to grips with the technical aspects of the system, without any training.

Senior managers have described the process to us as “shambolic” and “endless”. This will only get worse next year when the MHCLG starts trying to collect the names and addresses of clients. Due to the complexity of new data protection laws, the collection of this personal data about homeless applicants has been postponed until further notice.

Local authorities do recognise the advantages the new reporting system will bring in the long term. Their concern is that the abrupt transition to the new data gathering system will make monitoring the impact of the Homelessness Reduction Act 2017 impossible. But far worse, the effect of this “shambles” will drastically affect local authorities’ ability to plan and commission services to help homeless people. This could affect the numbers of people able to access homelessness services in 2020 and beyond.

This article is republished from The Conversation under a Creative Commons license. Read the original article.